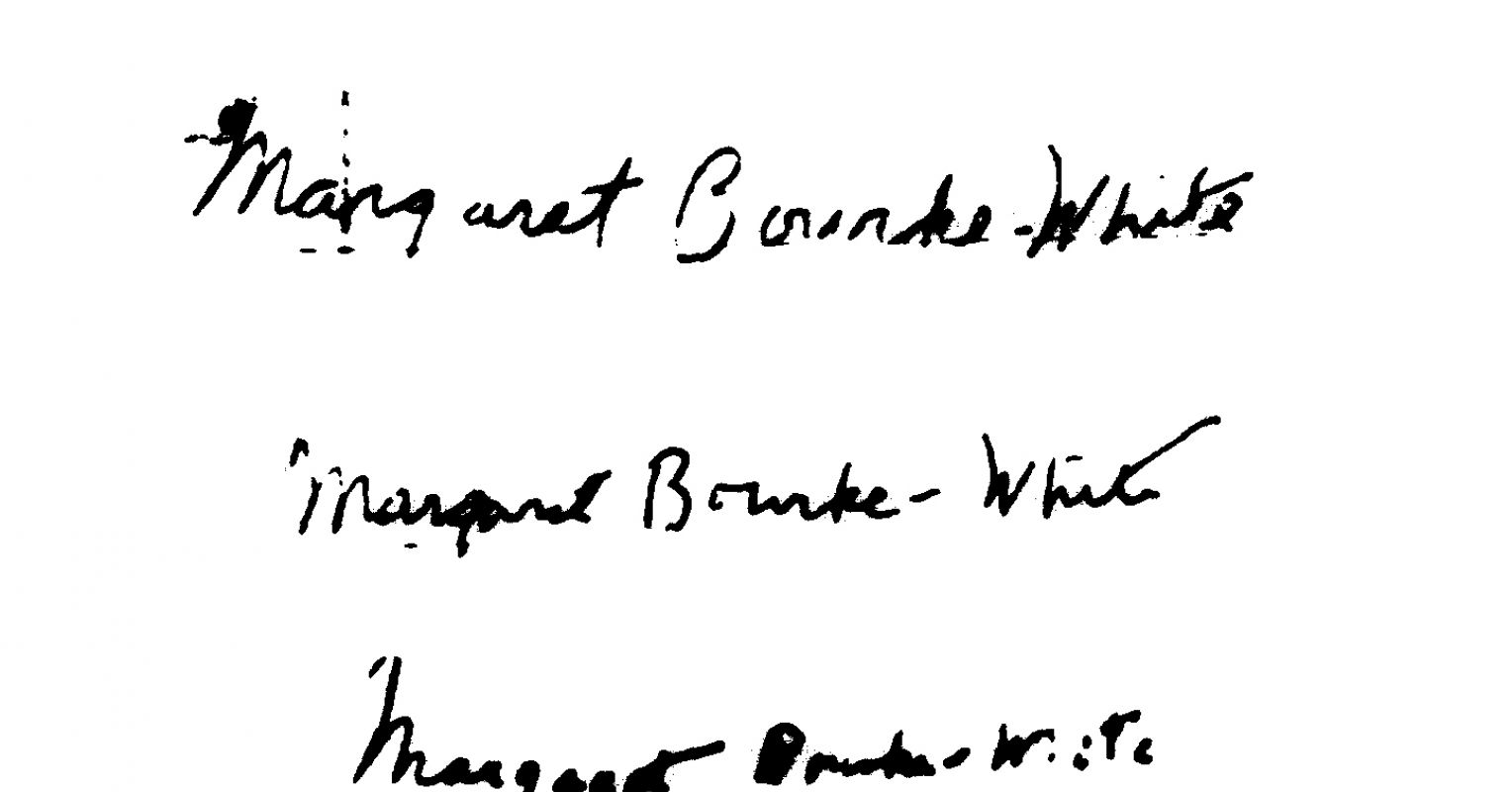 Computer keyboards have diminished the need for pen and paper in public and private life, but I still find it comforting to receive a handwritten letter in the mail.

The skill of writing begins with learning a chain of complex movements that are, through repetition and practice, transformed into a kinetic melody that no longer requires the brain to memorize the shape of individual letters.

People who develop writer’s cramp are able to learn to write with their other hand, and their new signatures resemble the original enough that they are generally accepted on checks by banks. There are also exceptional people who, following severe head trauma or after recovering from a stroke, learn to write with their dominant foot or even with their mouth. Remarkably, the appearance of their newly acquired script bears a recognizable similarity to their previous writing. Writing is a special motor program that is embedded deep in the basement of the brain in early childhood and becomes as unique as a fingerprint.

Graphology is now considered a pseudoscience analogous to phrenology and is no longer taken seriously as a means of guessing a person’s personality. Analyzing the appearance of a patient’s handwriting as part of the diagnostic process in psychiatry is also no longer considered useful, although it may still be useful in providing evidence to support a diagnosis. an improvement during the treatment of depression.

In neurology, on the other hand, observation of the act of writing, combined with careful examination of the script, is a reliable aid in the diagnosis of several common abnormal movement disorders, especially those where Parkinson’s disease is suspected. or a tremor is present. Graphology is also still used in criminalistics, for example in cases of attempted fraud or blackmail.

Parkinson’s disease is one of the most common causes of physical impairment in the second half of life, resulting in poor and slow voluntary movement, stiffness of limbs and impaired finger dexterity. There may also be tremor of the hands and, less commonly, tremor of the legs and chin. In its fully established form, Parkinson’s disease can be distinguished from other tremor disorders outside of the clinical setting by the distinctive shuffling, festive gait, frozen facial expression, and hang-dog appearance with loss of arm swing while walking.

For anyone who comes to me with a diagnosis of possible Parkinson’s disease or an unclassified tremor, I always ask, “Has your handwriting changed in the last year or two?” And, if so, how? The answer is often no, but sometimes an accompanying family member reports that the patient’s handwriting has become smaller, messier, or shaky. I then give the patient a pen and paper and ask him to write the following sentence by hand:

Mary had a little lamb its fleece was white as snow

And wherever Mary went the lamb was sure to go

As the patient begins to write, I observe the posture of the hand, and I take the opportunity at the same time to look for the appearance of tremors or muscle spasms in the non-writing hand or in legs and face. I then spend a few moments studying the handwriting sample, looking especially for any decrease in letter size. I also look for any bunching and cramping of the script or any evidence of unevenness, fading, or slight shaking on the upstrokes. Then I draw an Archimedean screw (a spiral) and ask the patient to copy it, first with their writing hand, then with their other hand, reassuring them that it will be a much more difficult task to accomplish with the hand that does not write. .

If the patient’s handwriting has always been small, it may be difficult to detect the telltale “micrograph” of Parkinson’s disease, and the abnormalities may be more clearly visualized in the spiral drawing. In patients with Parkinson’s disease, the Archimedean screw is smaller and with more compressed turns. If, on the other hand, the diagnosis is an isolated, indeterminate hand tremor, which in older people is often mistaken for Parkinson’s disease, the writing and spiral will be large, bold, and extremely shaky (Figure 1).

If I still have doubts, I can then ask the patient to draw a house with a door and windows, then examine the image for the pathognomonic “floating door sign” of Parkinson’s disease (Figure 2) . 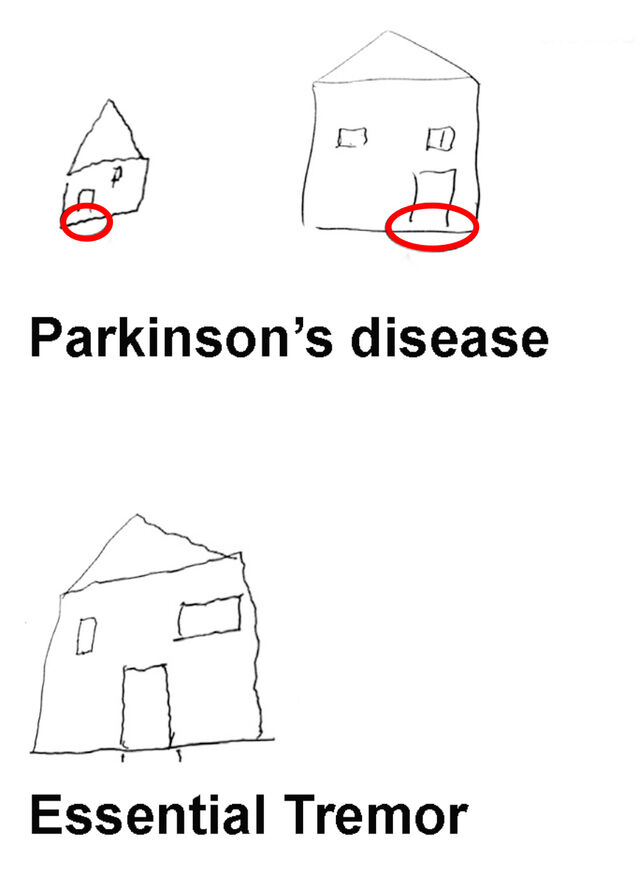 People with Parkinson’s write slowly and tire quickly, causing them to stop mid-sentence, lift the pen from the page, and start over. This maneuver may result in a brief temporary increase in letter size, but the characteristic decrement happens even faster. and culminates with the end of the sentence ending in an unreadable squiggle. If the patient is right-handed, the parkinsonian script often climbs steeply, while in left-handed people it drifts down the page. Many people with Parkinson’s resort to printing out each letter and find that they can increase the size of their handwriting if they use lined paper as a visual cue.

Serial monitoring of handwriting provides an index of disease progression, and if a patient can provide samples of handwriting dating back several years before the onset of their symptoms, it may be possible to retrospectively estimate when the first problems with finger dexterity have arisen, as in these cases. chronological signatures of Margaret Bourke White, the American photographer and first female war correspondent, who was diagnosed with Parkinson’s disease at the age of 49 but whose handwriting samples suggested to her neurologist that the disease had been brewing for several years ago (Figure 3) . 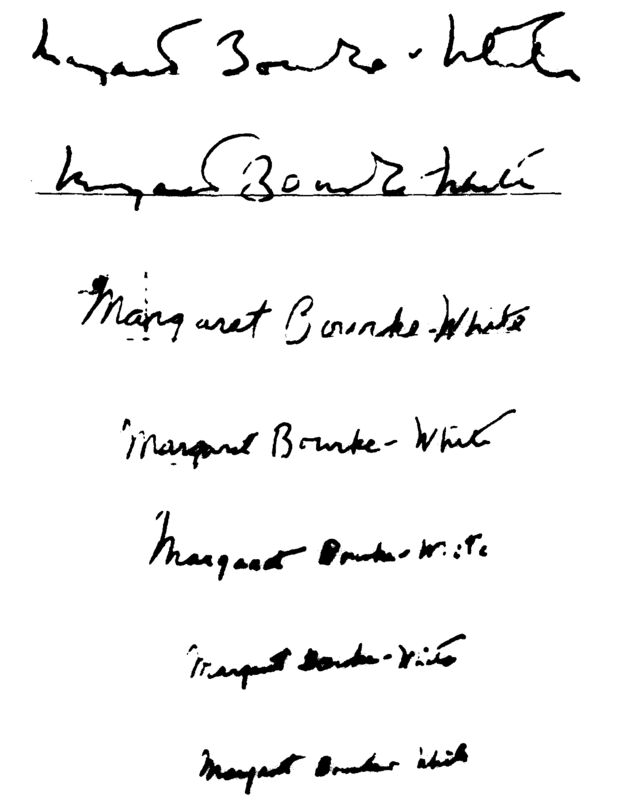 L-DOPA, a natural precursor amino acid of dopamine, is the treatment of choice for most people with Parkinson’s disease. It can significantly improve handwriting. and comparing a script sample after treatment with a sample from before treatment began can be used to convince patients of the effectiveness of their treatment (Figure 4). 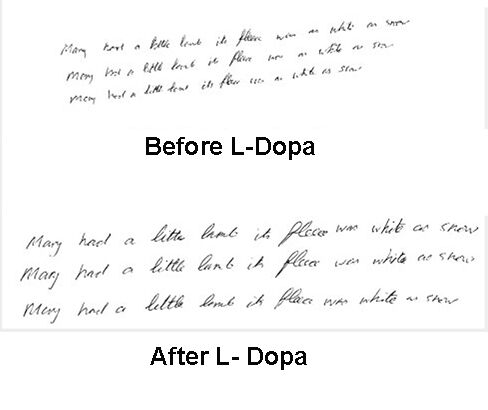 One of the pieces of evidence used to prove that the 60 volumes of Hitler’s diaries purchased for $4 million by the West German magazine Back were wrong was the fact that there was no detectable decrease in the size of the letters written in the later entries. Hitler was known to suffer from Parkinson’s syndrome in the last years of his life and had a severe tremor in one hand. Authenticated copies of his handwriting showed some of the characteristic changes in the micrograph (Figure 5). 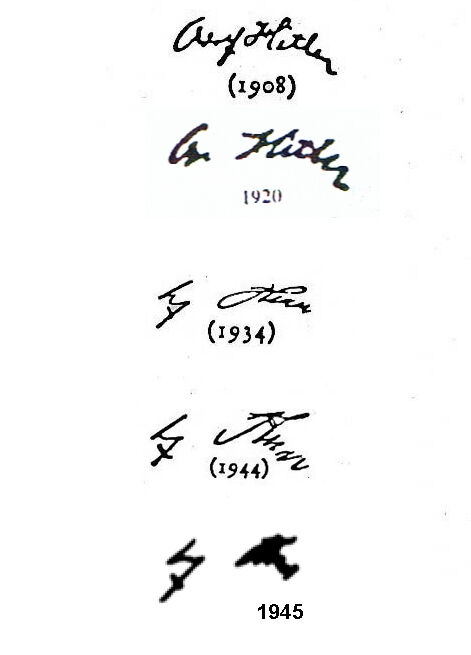 A diagnosis of Parkinson’s syndrome can sometimes be suspected simply by looking at a letter or postcard and does not require expensive and time-consuming digital tablet technology. Routine physical examination involving “the laying on of hands” remains an integral part of routine neurological practice and frequently leads to precise localization of the site of pathology beyond the resolution of neuroimaging.