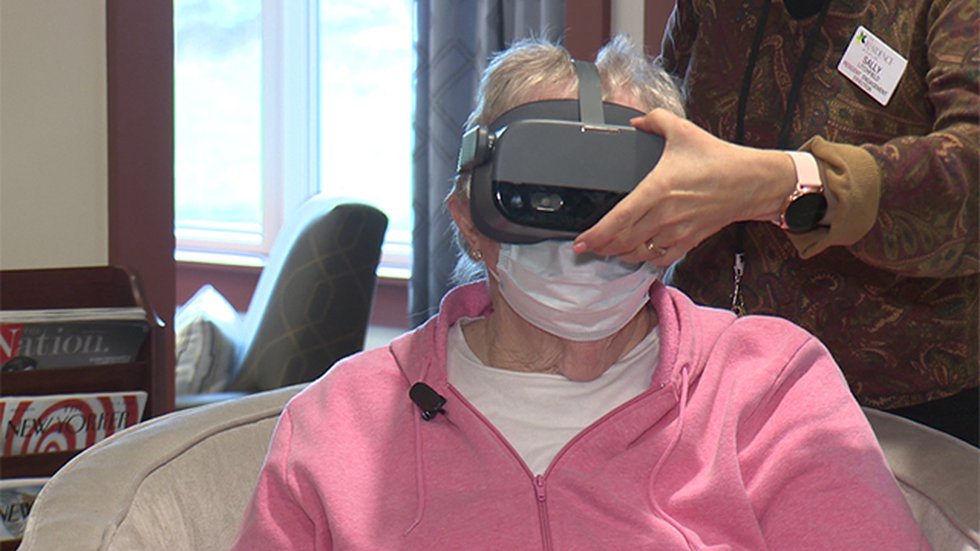 Once a week, Betsy Berry meets with staff at The Residence at Quarry Hill in South Burlington and dons a virtual reality headset for a series of five-minute tests. “This is the one where they’re going to give you a written word that’s a color – like the word orange – but they want you to say the word in the color it’s written in,” Berry explained.

These brain games engage his mind and nervous system while measuring his eye movements, vocal responses, and paint a picture of how his brain is functioning. When she first heard that Quarry Hill was offering REACT technology, the former teacher said she wanted to enroll. “I was mesmerized, absolutely mesmerized by the idea that some sort of project was going to come true,” Berry said.

Reporter Cat Viglienzoni: Was this what you thought it was going to be?

Betsy Berry: No it wasn’t … They pissed me off

Reporter Cat Viglienzoni: Because they were difficult?

Betsy Berry: Yeah, and I wanted to show off.

At 80, she says anyone aging is concerned about their brain health, but the reasons for joining were general.

Reporter Cat Viglienzoni: And the hope is then that the information you provide will help someone else down the road?

Betsy Berry: Precisely, yes. This is probably the main reason I wanted to do this.

This is also why Harry Orth, 90, also volunteered. The former University of Vermont English professor says he finds the tests interesting and doesn’t mind being a guinea pig. “It’s part of helping others. I was a teacher – it’s a helping profession – so that’s the kind of thing I’m happy to be a part of, ”he said.

Reporter Cat Viglienzoni: Is this again for you an extension of teaching?

Harry Orth: Yeah, except I don’t have any students. Students will be in the future in another form.

Orth says he hopes this machine will also tell him if his brain is slipping. And that’s precisely why Quarry Hill and their two other Vermont senior residences in Shelburne and Middlebury invested staff time and resources in running these weekly tests for interested residents last fall. “Giving the opportunity to provide residents with insight into their own brain health was something that we thought was a game-changer, honestly, in the industry,” said Ted Doyle, vice president of LCB Senior Living .

He said they were approached by the creators of the REACT Neuro program a few years ago and that with some big names in neuroscience behind the technology, he thinks the science is solid. He says what they learn could allow them to let their residents know if they notice any changes. “It allows us to give them suggestions from a lifestyle perspective on how they can improve their diet, their physical activity, their brain games. Things like that that will have a direct impact on them and help them maintain their brain health, ”Doyle said.

But REACT is not yet approved by the FDA as a diagnostic tool. This is where Doyle says they help. Because, as participants like Berry, Orth and others regularly use this device, they help build a large collection of data that researchers could potentially use to spot patterns and treat brain conditions like Alzheimer’s disease. and Parkinson’s disease. “Ultimately, the promise is that they will be able to give us advice on brain health from day one of our lives,” Doyle said.

“For the first time, we may have the equivalent of a blood pressure cuff for the brain,” said Dr. Rudy Tanzi, co-founder of REACT Neuro, the Massachusetts company behind the technology. He says they are testing this technology on several age groups, not just the elderly. This will allow them to collect data on a wider age range and create a baseline.

They will be going to the FDA at the end of the month to get approval to use for general wellness, similar to a Fitbit or other device. But approval for use in diagnosing brain diseases like Alzheimer’s or Parkinson’s is probably years away.